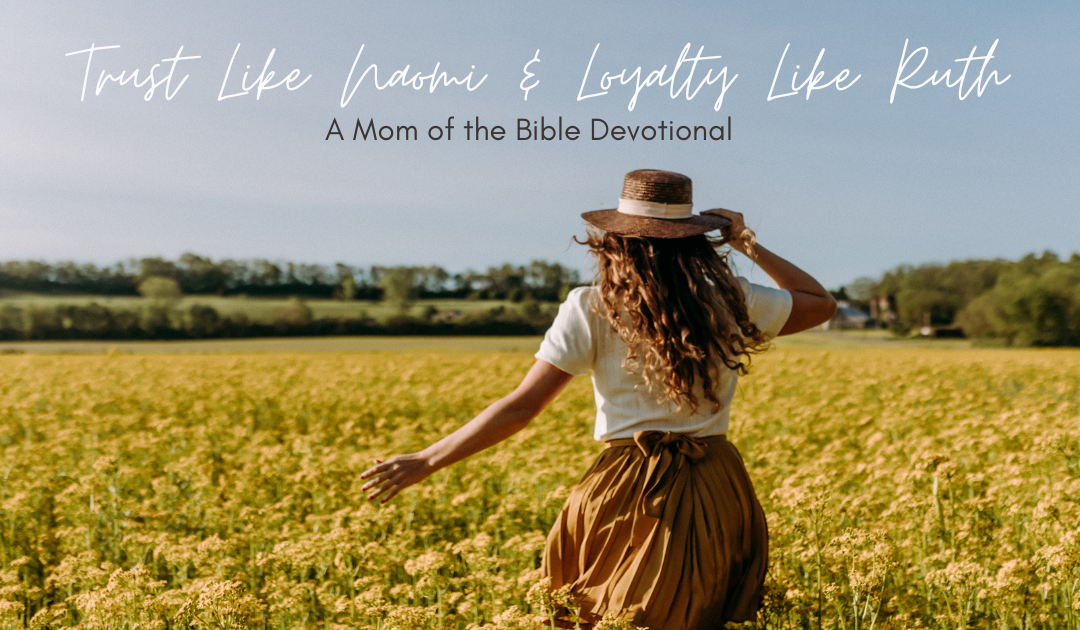 Talking about 2 moms of the Bible whose trust and loyalty, combined with a story full of redemption and romance, is better than any Hollywood cinema could ever hope to be—and you don’t have to look further than your own Bible to find it!

LISTEN TO THIS BLOG AS A PODCAST HERE.

Last month, we talked about the story of Rahab (If you haven’t listened CLICK HERE!) and because of the faith she had to risk everything to trust God and save His people, she was blessed to be included as a mother in the line of Jesus, as the mother of Boaz.

From the story of Rahab, being the mother of Boaz, leads us to these 2 moms of the Bible: Naomi & Ruth. This short, 4 chapter book of Ruth is one of my favorite books of the Bible!

The nation of Israel is in the was not doing well and famine had spread across the land, so Naomi and her husband Elimelech, took their two sons and relocated to Moab. One thing you must know about Moab is it was an enemy country to Israel dating all the way back to Lot’s daughters and their sin after the destruction of Sodom (we will save that story for another day though!) What you need to know, is that things must have been pretty bad for them to be willing to go live in Moab.

While there, Naomi’s husband Elimelech dies and leaves her alone with their two sons. Both of them end up marrying moabite women named: Ruth and Orpah. (Who I usually end up pronouncing “Oprah” half the time!) Not long after that another tragedy happens and both of Naomi’s sons die too, without much detail given, leaving ALL three women widows!

After this, Naomi decides to return to her home to Israel. Ruth and Orpah make plans to go with her, but Naomi tells them to “go back home,” and she cried and “kissed them goodbye.” So this wasn’t your typical daughter-in-law/mother-in-law relationship…

———->>>>> I have personally been blessed with a wonderful mother-in-law, but MANY of my friends have not been so blessed! So if that’s you CLICK HERE to return to the homepage, scroll to the bottom and sign up for a FREE DOWNLOAD on 3 ways to have a better relationship with your mother-in-law.

Back to the story…So, Naomi was not only selfless as a mother-in-law, but she was also loving, and it was this love that ultimately came from the Lord, that must have been contagious to Ruth. Because Orpah ends up going back home, but Ruth stays and says the famous verse you have likely heard before in chapter 1:16&17:

I think from this point on, Ruth and Naomi become an inseparable duo, and Naomi takes her home and begins to mentor Ruth, about her home country and her faith. Realize though, as widows, it wasn’t like they could get jobs and start over to provide for themselves at this point in history. Back then, widows were on the streets without male relatives to save them.

So Ruth decides she is going to go to work in a field to find them food, and she ends up working in Boaz’s fields, who happens to be a relative of Naomi’s late husband—all part of God’s plan of course— but Ruth did not know this at the time.

Boaz first sees her in chapter 2 and asks his workers: Who is that?! You are likely familiar with the story or can guess, that he begins to take an interest in Ruth and wants to help her. So In verse 9 Boaz tells her:

I’m sure Ruth was thankful but also caught off guard by his kindness, so Boaz reassures her, by letting her know he knew how she stayed with Naomi and was trying to work to provide for them. So when Ruth returns with ALL this food, I’m sure Naomi was like, where did you go?! Then Naomi learned it was Boaz and was like—OHH OKAY!—I see what’s happening here, and she explains how they are related.

From here, Naomi comes up with a plan and Ruth once again trusts and follows her, and the rest is history (literally in this case,) but Ruth follows the plan and she and Boaz are married. (Be sure and go read the Book of Ruth yourself for the entire story.)

Boaz becomes the families kinsman redeemer, which basically means, a male relative who rescues a widow in the family through marriage. Usually, it was just a business deal, but for Ruth and Boaz, it ended up being real love!

So, if you haven’t read the entire story of Ruth before, I really encourage you too do that—it’s only 4 chapters and you will really enjoy it after knowing this context! (Be sure and go read the Book of Ruth yourself for the entire story.)

Okay, so how does this story relate to me as a mom?

There’s so much to learn from both Naomi and Ruth, but TWO things really stick out to me:

1. First, with Naomi: Even when she lost her husband, sons and left alone in a country that was not her home, she still trusted God and followed Him through all of the difficulty. She even decided to GO BACK home…Going back with NO husband and NO children or grandchildren would not have been easy! However, through it all, she refused to give in to bitterness and self-pity, even though she had a lot of pain in her life.

I think it was this trust she had in the Lord, her selflessness and the love she showed Ruth, that ultimately drew Ruth to her and to her God. This is a true example of what an older woman can do for a younger…let her see your pain…let her see your real life…but also let her see you trust God through it! That is what a mentoring friendship looks like.

2. Second, With Ruth: Right off the bat, the thing I LOVE most about Ruth is her loyalty and her willingness to work hard. She doesn’t leave Naomi when it would have been easy to do so, and she doesn’t go back to her home country or her religion that would have been more comfortable. Instead, Ruth makes a foreign country her home and because of Naomi’s example, she begins to follow God, which was the opposite of everything she was raised to know.

Ruth was not afraid of hard work! Picking up grain in the hot sun would not be an easy job, but I like to imagine it gave her a lot of time to think…to learn how to trust like Naomi did. Like Naomi, Ruth had a lot of hard things happen to her too, but God kept providing the grain, so she kept stepping. Leading her to Boaz, but more importantly to JESUS. She and Boaz became the parents of Obed, and once again like Rahab, the Lord blessed Ruth with the gift of motherhood in the line of Jesus Christ.

What can I take away from this story?

Maybe, like Naomi, you are walking through some hard things right now…Are you trusting God through it? It may be that trust in the midst of trials and selflessness is to love others despite what is going on in your own life. Showing your kids, your family, your friends and those around you, how God’s love is unconditional and it’s contagious!

Or maybe like Ruth, you are a new Christian and a lot has happened in your life, but the Lord keeps providing so you keep stepping. Keep the faith and keep stepping, because the Lord will bless you.

Or maybe you’re overwhelmed and overworked and trying to do your best as a mom…I’m with you on this one, but I encourage you to be patient and keep picking up those toys and dirty laundry, because the Lord will honor your hard work!

In ALL cases, I challenge you to find a Naomi in your life to mentor and encourage you, who has lived and experienced hard things, but has learned how to trust the Lord through them. You may say, well I have nobody…what should I do? If that’s you, I encourage you to pray and ask the Lord for to bring you someone…really pray and trust that he will do it!

Also, tune into an upcoming blog and podcast coming NEXT MONTH on how to ask someone to be your mentor! And if you identified with those friends of mine that don’t have a “Naomi” for a mother-in-law and that is an area of struggle for you, check out and download 3 ways to have a better relationship with your mother-in-law on the homepage. Scroll to the bottom, put in your email and it will drop in your inbox.

LISTEN TO THIS BLOG AS A PODCAST HERE.