What will your kids remember about you? 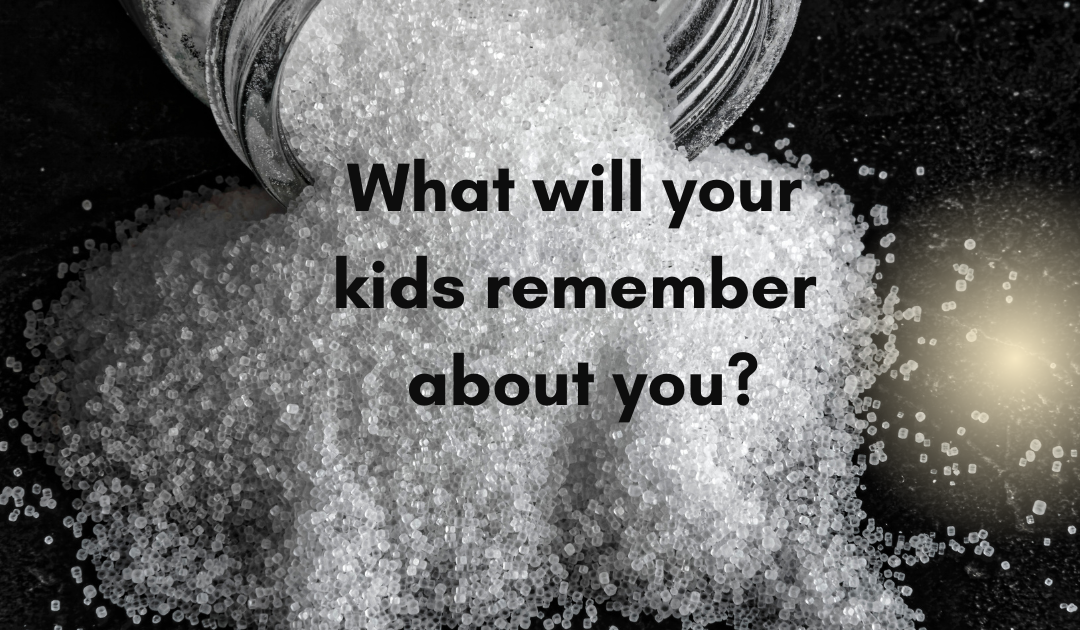 Have you ever wondered, “What will my kids to remember about me one day when I’m gone?” Will they remember my love for Jesus and how I told them about Him, or will they remember me for something else? Asking some hard questions today to avoid becoming like this mom of the Bible…

Listen to this blog as a PODCAST HERE.

Last month the mom of the Bible devotional was on the Widow of Zarephath, but you may remember her as the women with the miracle of flour and oil that didn’t run out. She taught us that no matter how hopeless things may seem, to not be overcome with worry because God still sees you and he will provide for your every need, even from the most unexpected places! (CLICK TO LISTEN TO THIS PODCAST EPISODE.)

The mom of the Bible we are focusing on today offers a challenge of “what-not-to-do.” Lot’s wife, from Genesis chapters 18 &19 will always be remembered for her final choice to choose the world over the things of God…not a great way to be remembered right?

I know I don’t want that to be what my kids remember about me!

Let’s Dive into the Story…

I want to encourage you to go back and read Genesis 18&19 for yourself, to fill in all the details of the story, because we are just going to hit the high points of the story. It starts off with Lot’s uncle Abraham begging God to save the people of Sodom.

Sodom had become so evil, that God had promised if He could just find 10 people that still love Him, He would spare the people there. And God did search, but He couldn’t even find 10 people, so He made plans to destroy Sodom…But, because of Abraham’s prayer, the Lord has mercy on Lot’s family.

Lot is first found in these passages hanging out at the city gates. This likely meant that he was wealthy or some kind of important Government official in Sodom, so his family was not hurting…He and his wife were likely enjoying this lifestyle of high status. But it was here at the city gates where everything began to change!

Lot meets 2 angels that God had sent to destroy the city, who just looked like 2 ordinary men coming for a visit, and Lot offers to take them home and let them stay at his house.

Some pretty crazy things happen throughout the evening, making it very apparent that Lot, his wife and his daughters were all completely surrounded by sin! Even if they did not agree with some of it or participate, they were so engrained in the culture, that they had become blind to sin and the concept of right and wrong. Sin will do that to you..it blurs the truth and your need for God!

So as these two men are experiencing this craziness in Genesis 19, they tell Lot in verses 12 &13:

I’m sure this shocked Lot and his wife, but because of their past before Sodom, I think they still knew to listen and that these angels really were sent from the Lord. However, evident of the life they had been living, when they brought up the name of God to the people in Sodom and shared the plan to destroy the city, the people just laughed at them!

We can’t blame the people for this, because they had likely never heard Lot mention the name of God until now! Lot and is family clearly had no fruit in their lives, so why should the people of Sodom believe them now?

So it’s here where the angels tell Lot to get his wife and daughters and leave RIGHT in that moment or they would be swept away when the city was punished! It literally says is verses 16 &17:

But somewhere between these instructions and the chaos of running out of the city, they must have gotten separated, and Lot and his daughters realized once they had reached safety, that Lot’s wife and the girls’ mother was not with them..

I’m sure they panicked at first and began to search for her, until they caught sight of a pillar of white salt in the shape of a woman turned back looking towards Sodom!

My question is: Why did she do it?

Why did she turn back, when the angels clearly told her not to? Was she so attached to the things of this world that she didn’t want to leave it all behind?

Whatever her reason, it’s really sad! Because she is now forever known as the woman who became a pillar of salt. Nothing is said or remembered about the wife she was or the mother she was to her grown daughters, who Scripture said were “still virgins in this sinful city,” so Lot’s wife must have been doing something right? But yet, all she is remembered for, is her last choice…

So this got me thinking as I have combed through and studied this story of Lot’s wife:

What do you and I want our kids to remember about us as their mother? You can’t turn around and go back or change the past where you messed up, but you can do something about today and the future!

You and I can choose to live each day with purpose for Jesus and be a mom that is present and actively looking for ways to share Jesus with our kids and with others..Living life as if it was our last—that’s real purpose that looks forward and not behind!

Meaning, God doesn’t have to give us his mercy or give us extra time or take our daily calendar into account…

We should be living, realizing that everyday we wake up, that’s another gift from God! And we have important work to do as moms to tell our kids about the love of Jesus in everyday conversations, because like the city of Sodom, our world is also VERY sinful! Our culture has polluted the truth of marriage, of sexuality, of beauty and so many other things…it’s only a matter of time before God’s patience will run out!

So what are you doing to actively separate yourself from the sin of this world and be the best version of yourself? To be a mom who pours Jesus into your kids?

I have a challenge for you today to take your focus off of the world and plan it back on the Lord. I know you can’t quit making dinner, working or running errands, but let’s cut out what you can do…

Myself included: I challenge you to take a week long break from all things media. Instagram. Facebook. Netflix, etc…you get the idea! You will likely be shocked at how much more free time you will have to spend with the Lord and your kids when you do this.

Ask the Lord to reveal any sin in your life and to recognize the dependency and the time that you have spent on these things. How really, they are the things that are guilty of robbing your time and focus from the things that really matter—like being with your family, spending time in God’s Word and having the flexibility to still help others instead of saying “I DON”T HAVE TIME…

I was listening to a message recently from pastor Adrian Rogers and he said:

You may even need to confess some sin from your past or lay down a desire you had for your own life that never happened and pray and ask the Lord to take it from you, to stop looking back and come to the end of yourself to let Jesus take the lead in your life.

And in giving up media and things that feed your flesh, you will have the time and focus to realize these things. You won’t be distracted or mixed in the things of the world like Lot’s wife was!

While you are taking this break from media, I encourage you to spend more time with intentional time with both your family and in God’s Word. And if you need some resources to help you with this, we have some great bible study resources available. I recently walked through one with a friend of mine on the Fruits of the Spirit that I highly recommend!

Listen to this blog as a PODCAST HERE.